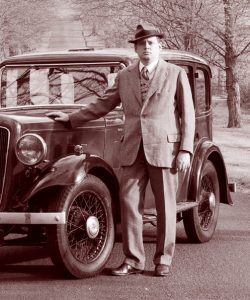 Ian Bayley, Proprietor of Sabrestorm Publishing, with his Austin 12 car

It’s been three months since Sabrestorm moved from its lifetime home in Dunton Green, Kent to its new home in Devizes, Wiltshire.

Many of those in the publishing profession will have been familiar with Dunton Green, not immediately for its connection with Sabrestorm but because it was the original home of Hodder and Stoughton back before a number of mergers and takeovers. I can well remember the shining glass warehouse and the extensive offices. But, like them, we too have moved to  pastures new.

In a time when more and more business is conducted online and more office space was needed, Wiltshire offered a perfect alternative and in Devizes a beautiful market town to enjoy.

Despite moving in August (a traditionally quiet month), the disruption was more than I imagined with our Friends from British Telecom not helping our stress levels. (I’ll refrain from boring you with our BT woes – and I don’t have space!

We are all settled in now and working hard on the exciting new books lined up for 2018. I’m particularly delighted that Mike Brown, who is known for his books on the Second World War Home Front, has written a fascinating guide to the British Home Front in the First World War, Dear Old Blighty. It sheds a whole new light on the WW2 preparations and is a real eye-opener. Other highlights include a book on the Second World War Battle for Normandy by Stuart Robertson (Author of D-day – Following in the Footsteps of Heroes). This looks at the battle for Normandy with a particular emphasis on the actions where medals for bravery were awarded. Stuart does not hold back on his praise and criticisms in a book that puts the record straight on many of today’s assumptions and Hollywood-inspired fabrications. It will be available in Autumn 2018 and is certainly worth looking out for.

I must just mention one final book that is underway by Penny Legg (Author of Crime in the Second World War). Penny is working on a moving account of the many children who were evacuated during the Second World War. There have been many books covering evacuees but this one will be something special and I will be looking forward to telling you more about it in the months ahead. 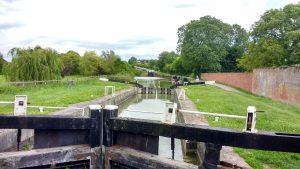 One of 29 locks on the Kennet and Avon Canal 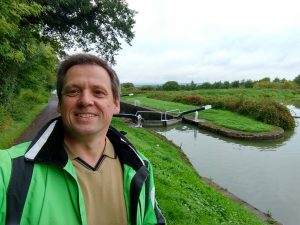 Ian Bayley, Proprietor of Sabrestorm Publishing, at The Kennet and Avon Canal.

Moving has not all been hard work and we have taken the time to visit the famous Caen Hill Locks (29 locks in just two miles) where a brisk walk in beautiful surroundings can clear the head ready to get back to the office.

Another attraction not to be missed is the Wadworth Brewery tour, which, whilst very enjoyable, does require an afternoon off so that the quality of the beer can be truly appreciated! 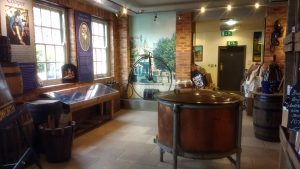