Liz Coward, co-author of Blood and Bandages – fighting for life in the RAMC Field Ambulance 1940-1946, moves to Singapore. 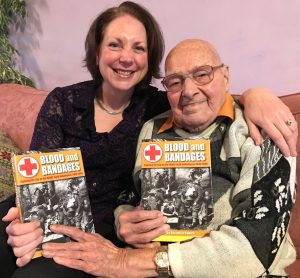 Liz Coward and William Earl with copies of ‘Blood and Bandages’

In April 2017, when my attention was fully focused on preparations for the launch of Blood and Bandages, my husband Richard, was offered his dream job at Airbus Asia in Singapore. He had been working for them on contract but had so impressed them that they had offered him a permanent post.

While this was headline news in the Coward household, it could not detract from the culmination of seven years hard work by 102-year–old William Earl and myself. Thus, when Richard returned for the book launch, attention was fixed on the Shoreham Centre, not the Far East.

The launch was a great success. 140 people attended and there followed a slew of radio and TV interviews, newspaper articles and requests for book talks. The response was thrilling and between engagements, Richard and I discussed the terms of his job offer. We both loved England but had suffered from the nature of contract work, which had forced Richard to work abroad every other month.  This new job would restore our family unit so could not be refused. When the offer was formalised in June, we sadly announced our plans to leave the UK. After the initial shock and tears, our families supported our decision.

From then on, we began the long and emotional process of severing ties with our home country. We served notice on Tom’s school and contacted ex-pats for advice on international schools in Singapore. William, (who had accepted the news with grace and sadness), and I made the most of our remaining time by promoting the book at local summer events. Meantime, Richard left for his final overseas contract, leaving me to arrange school visits, contact letting agents and organise home schooling for the autumn term. 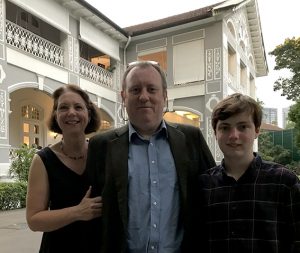 Liz Coward with her family in Singapore

Plans stepped up a gear in September when Richard met us in Singapore and to look for Tom’s new school and our new home. Luckily, we returned with both. Three weeks later, on 11th October, Richard left to start his new job with Airbus Asia Training Centre.

At home, the task I faced was daunting.  Tom and I were due to join Richard on 6th December which left me eight weeks to de-clutter the house and select what should be shipped to Singapore and what should be stored at home; supervise Tom’s home-schooling; ready the house for the new tenants; prepare and present five book talks and say emotional goodbyes to family and friends. It made every past challenge I’d faced look like child’s play and would have been impossible without our friends. They pitched in instantly and whole-heartedly. They sorted out the loft; did regular dump runs; packed up the kitchen, bedrooms and study; took countless loads to charity shops and weeded and pruned the garden in freezing conditions. They kept me sane and on track with their humour and good advice.

Meantime, Tom impressed his tutors with his thoughtfulness and talents and when the house contents were emptied into a container, he moved in with his grandparents while I moved back into my old bedroom at Mum and Dads.

With all this going on, it took me a while to find the best format for the book talks. I wish I had been better prepared for the first ones but nevertheless they were well received and some were moved to tears. 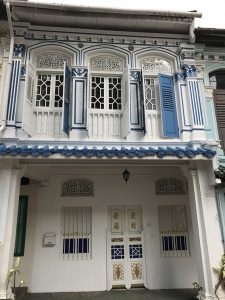 The architecture in Singapore is a mixture of old and new

William contributed to all, bar one, of the talks despite the lateness of the hour and distances involved. Knowing the stress caused by the move, he gave me encouragement and advice before and after each talk. It was wonderful and reassuring to have him there and his contributions were priceless. To hear directly from the star of Blood and Bandages moved two audience members to keep returning to hear him speak.  They were rewarded with a new tale every time. The final talk was on a chilly November night before a packed and attentive audience in Sevenoaks. William and I were delighted with the response but the evening was tinged with sadness as this was our last talk, and at 102, neither of us was under any illusions about the significance of the event.

Unfortunately, there was little time for reflection as the next day I embarked on a two-week period of farewells that saw me travel to Guildford, London, Westerham, Hereford, Rhymni and Caerphilly in Wales. It was sad to know that I may never see some of those people again. Finally, as planned on 6th December, Tom and I said an apprehensive goodbye to England and left for Singapore.

We arrived a few weeks ago and since then I’ve felt a bit rootless. Luckily, Tom has made friends at his new school and Richard already feels like an old hand. I’m certain that I’ll feel more settled when we move into our permanent accommodation and start to unpack our belongings.

I’m looking forward to the next chapter in the life of Blood and Bandages. I’ve already got a book talk lined up and will start work on adapting it for the screen. In the New Year, I’ll embark on a fresh adventure when I join the feature writing team with BEAM, the monthly magazine for the British Association here in Singapore and I’ll be exploring ideas for a new book. 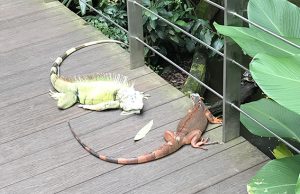 Some of the local wildlife is a little more exotic than we’re used to in Sussex.

Of course, we’ll miss home terribly but we are returning in July 2018 to see family and friends and to attend the War and Peace Revival. God willing, William will be there too and we’ll pick up from where we left in November.