The Onesie is nothing new – Churchill was a big fan, but there seems no barriers to the popularity of this ‘new’ garment as it transcends both class and age. Grandmothers wanting something warm and comfortable to wear around the house, young mums rushing to take the kids to school, and children themselves who find them a practical and fashionable alternative to ‘conventional’ clothing.

And it seems that there is a Onesie to suit every pocket with prices starting from under £10 and going up into the hundreds. Marks and Spencer received considerable press coverage by announcing a Cashmere Onesie in their Autumn collection available for £199.

There are certainly those that dislike this new fashion trend, and suggest that they are just adult sized baby grows, have no redeeming features and should be the sole preserve of the new-born. However, when thinking of its use as a baby grow we can see just why it is so practical and why the Onesie is not a new phenomenon but has its origins in the Second World War as the Siren Suit.

The Cashmere Onesie from Marks and Spencer.

The Siren Suit or as it was more widely known the Shelter Suit became a popular garment during the Second World War. To understand its popularity you must really consider the difficulty that many faced during a time of increasing air raids and consequently interrupted nights. Being woken in the middle of the night by the sound of the air raid siren would just be the first step in the rush to get under cover. Getting dressed, grabbing a bag of essentials that you had (hopefully) prepared the previous evening and ensuring everyone was accounted for before rushing to the Anderson Shelter at the end of the garden was a common ritual for many.

Anderson Shelters were notoriously cold and damp. If you were going to be there for some hours you had better ensure that you were wrapped up warm. The Shelter Suit offered many advantages to conventional clothing. It was designed to be slipped over your nightwear, could be put on very quickly (often in the dark) and was nice and warm. 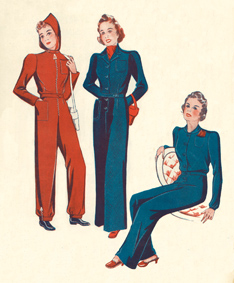 Winston Churchill was a keen advocate of the Shelter Suit and was often photographed with visiting dignitaries in one of several he had made. The brightest of which was a red velvet suit that can still be seen exhibited at the IWM Churchill War Rooms in London.

With the Prime Minister himself being seen publicly and in the newspapers wearing this very practical garment then there was no-one who could feel out of place wearing one. In fact it became rather patriotic to be seen in your Shelter Suite especially if you were of a higher social standing – it showed that you too were doing your bit.

If you are concerned by the £199 price tag of the M & S Onesie then you may be interested to know that its not the most expensive Onesie. In 2002 a grey wool Siren Suit worn by Sir Winston Churchill was sold at auction in London by Sotheby’s for £29,875.