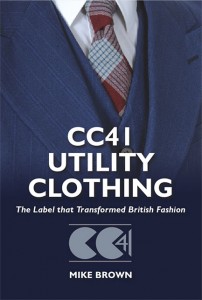 The CC41 Utility logo, or the ‘two cheeses’ as it was known at the Board of Trade, was probably the most well-known symbol in Britain for a decade from 1942. While it was used on shoes, household textiles such as tea towels, sheets and blankets, and furniture, it is by far best remembered in terms of clothing, so much so that, as a brief foray into ebay will demonstrate, it has erroneously become a term used to refer to any clothing from the period.

Worse, mystery and controversy surrounds the utility system, the meaning of the various stamps, symbols and numbers associated (not always correctly), with Utility. Even the CC41 symbol itself is ascribed several different meanings, depending on who you speak to: Controlled Clothing, Controlled Commodity, Civilian Clothing, etc. On the face of things this seems unbelievable. How can the details of a hugely widespread scheme, operated within living memory, have become lost?

With the historical focus this year set firmly on World War 1, one thing becomes very clear as regards the home front; very little that affected the civil population in World War 2, had not been faced, and to a great extent dealt with in 1914-18. Rationing, air raids, gas-powered cars, civilian anti-invasion forces, and of course clothing. The clothing and other textile demands of the vastly expanding armed forces, added to the curtailment of imported raw materials due to the U-boat blockade meant a shortage of cloth, and this at a time when the needs of the services were always going to come first, left civilians very much last in the supply chain.

In 1917 the answer was the introduction of ‘standard clothing’; as it sounds these were planned to be men’s and youths’ suits, and women’s and girls’ hosiery, underwear and dresses made from ‘standard cloth’ to a fixed pattern with a (low) controlled price. They began to appear in the summer of 1918, but proved a disaster. Manufacturers complained they could not make a profit on them, while consumers complained that the colour ran, and the material went ‘bobbly’ or unravelled. By now the war was almost over, and the scheme was quietly forgotten. 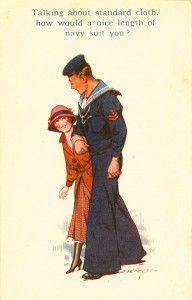 By 1941 Britain was facing another war of attrition, and the same situation applied as it had in 1917. The lessons of the past had been learned – whereas it had taken food queues and bread riots to force an unwilling government to introduce national food rationing in May 1918, after nearly four years of war, it was re-introduced in January 1940, after just four months. Again, as in WW1, shortages led to price rises for non-rationed items, and clothing was especially hit, with prices rising well above the cost of living.

Under the Limitation of Supply Orders, manufacturers were only allowed to produce a certain proportion of the goods they had made pre-war, the proportions varying depending on factors such as the scarcity of the raw materials involved and the necessity or otherwise of the final product. In April 1940, the limits on cloth were a 25% cut in wool and rayon, and a 75% cut in linen, and that was if they could get the cloth – far harder said than done. Under these circumstances it was only natural that many manufacturers cut out their cheaper, less-profit making lines. Again there were protests, and calls for clothing rationing, but Churchill did not believe that the public would accept it.

The Board of Trade were responsible for clothing, and in 1941, the President of the Board of Trade, Oliver Lyttleton, managed to slip through clothing rationing while Churchill was busy with the hunt for the Bismark. The public accepted it with hardly a murmur, Churchill seemed to have forgiven Lyttleton, but it is the case that he was moved less than a month later, being replaced by Hugh Dalton.

Dalton was one of the Labour ministers brought into the cabinet after Churchill formed the coalition government in 1940. Churchill like others had learned from the mistakes of 1914-18, and was aware that the efficient conduct of the war required the introduction of measures such as rationing and conscription, which were completely at variance with the free-market, libertarian ethos of conservatism. These ‘necessary evils’ became known as ‘war socialism’, and it was generally accepted that, as such, they were best run by labour politicians, such as Dalton, or by businessmen such as Lord Woolton.

One month after Dalton took over, Metford Watkins was appointed ‘Director of Civilian Clothing’ at the Board of Trade. The problem of high prices still remained. There had been much debate about the reintroduction of standard cloth, or standard clothes; terms which brought a shudder to many. Watkins promised to bring in cheaper clothes for the poorer classes, but stressed that this would not be at the price of standardisation. “Let us call it a Watkins suit” he said “In no sense will it be civilian uniform’. A few days later it was also announced that the government intended to produce ‘National footwear’. 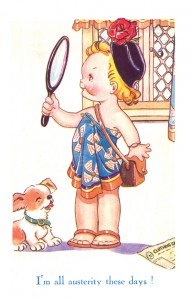 Soon after the Board began to issue the ‘Austerity’ provisions. These were strict rules which dictated what might and might not go into the making of clothes and footwear; how many buttons, pleats or pockets could go into an item, the height of heels and the use of elastic, lace or embroidery. Banned altogether were turn-ups, double-breasted jackets or suits, cut-outs on shoes, and many other ideas which wasted material.

In October 1941, purchase tax was introduced; this could be charged on different articles at different rates, so necessities could be tax-free, while luxuries such as gold jewellery could have a 100% or more tax rate, stimulating the production of cheaper, more necessary articles.

Thus, through rationing, the government had curtailed consumption, through the austerity provisions it had cut down waste, and through purchase tax it had discouraged the manufacture over expensive clothes. These were, one might say, ‘sticks’, now the government started to produce the ‘carrot’ of Utility.

First came Utility cloths, made to set specifications. By now, textile firms were being supplied with raw materials on a quota system. To encourage production of Utility cloth, manufacturers who agreed to do so received a far higher quota. This Utility cloth could only be used to make Utility garments, again to specifications, and again clothing manufacturers would receive a far bigger quota of Utility cloth than non-Utility if they agreed to opt-in to the system. Last the consumer was encouraged to buy Utility items when it was announced that Utility clothing would be purchase-tax free, making it significantly cheaper than similar non-Utility items.

That September, 40 cloths were specified for the scheme; 16 cotton, 19 wool, four rayon and 1 locknit; at the same time the Utility mark appeared. It had been designed for the Directorate of Civilian Clothing by Reg Shipp. The Board insisted when asked by journalists that the symbol was just that – a symbol meaning nothing, yet many pointed out that the two cheeses looked very like a double C, for Civilian Clothing? Certainly not Controlled Cloth or Commodity, as by then, all clothing was controlled by the austerity provisions, and all but the most expensive (made-to-measure Couturier models) were price controlled. 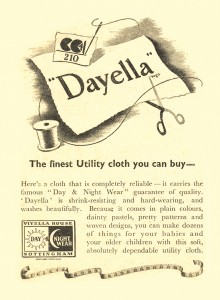 We may never know the definitive answer to that question – by the time the symbol was released to the public it had been agreed to extend the term Utility to clothing, footwear, and to furniture. A single identifiable mark would be very useful to the public, who needed to know whether purchase tax should be charged, (several unscrupulous traders were prosecuted for cutting out Utility labels). The answer probably lies in a Board of Trade file –‘discussions on the Utility Mark’ – but, and it’s a big but, the file was lost when thousands were transferred to Kew in the 1960s.

At first there were complaints; the original specifications were so vague that some goods were definitely shoddy, but soon these hiccups were ironed out. Certain specific ones remained; Utility children’s shoes were notorious, stocking were poor and corsets appalling, but all-in-all the mark was one of cheap, but reliable goods. To extend the range, and improve choice, Utility clothes and footwear were produced in three grades, as were non-Utility, giving three price ranges – this is most easily seen on shoes, where women’s shoes for example, besides the Utility mark and the individual specification number are marked W1, W2 and W3, indicating their price range.

As war socialism, the Conservatives intended to scrap the scheme post-war, but Labour’s victory in 1945 meant the scheme continued until 1952, when the new Conservative government scrapped its purchase tax exemption, effectively and actually killing it off.

“CC41 Utility Clothing” by Mike Brown is full of informative detail and colour photographs. It is available direct from Sabrestorm or can be ordered from all good bookstores from 14th November priced at £19.95.

Mike is launching the book on Friday 14th November (7pm) with an illustrated talk at Sevenoaks Library in Kent and you are welcome to come along and meet him. We are keen to support the library and the £2 ticket price for the evening goes directly to them and will help support the library services. Tickets need to be ordered in advance from Sevenoaks Library on 01732 585300 or by email jenny.carter2@kent.gov.uk

I hope to see you there. 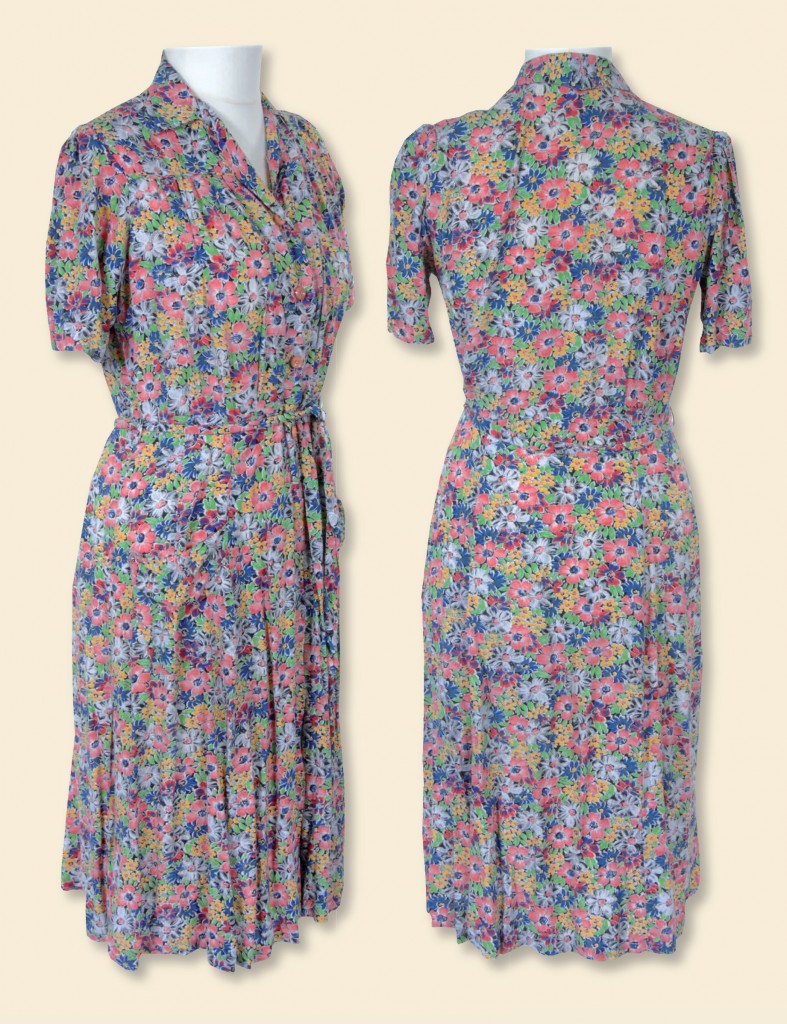